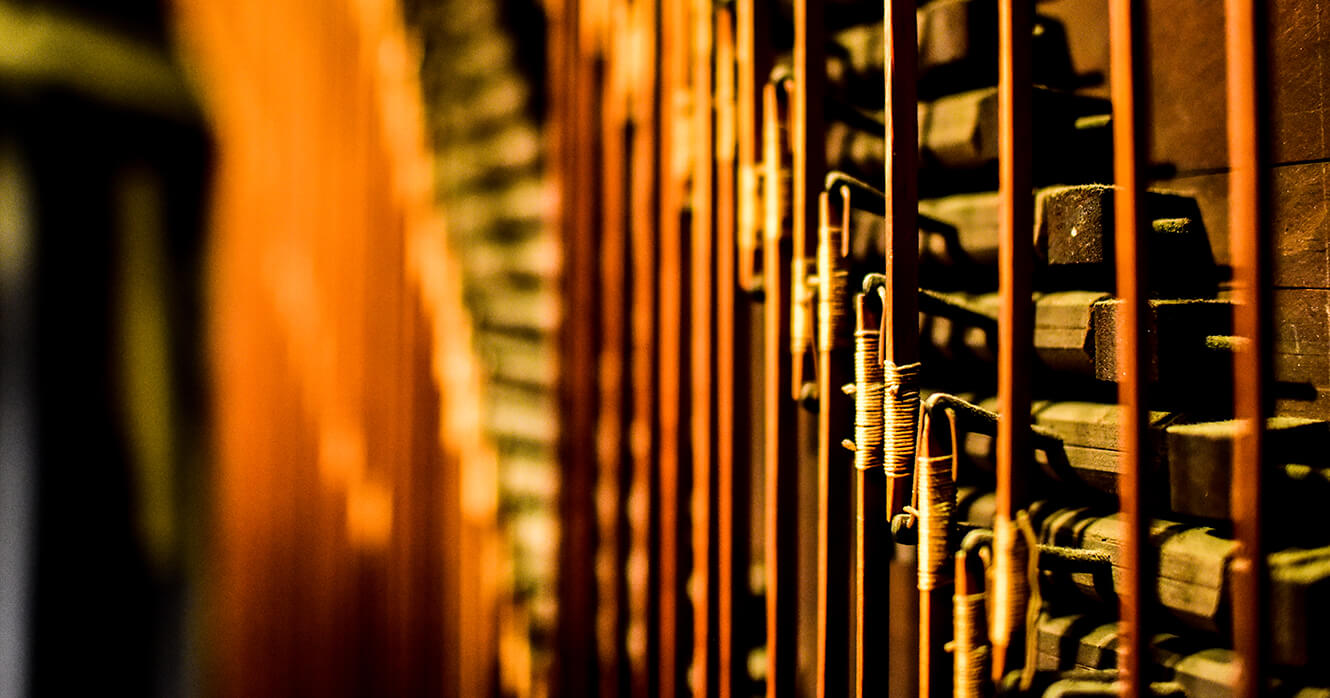 About the 1868 Henry Erben Organ

This organ is one of New York City’s historic gems. It was constructed by the world-renowned New York City organbuilder Henry Erben (1800–1884). It is the only extant three-manual Erben organ, and is the only large, mid-19th-century Henry Erben pipe organ left in America, intact, in its original acoustic space. The organ has logged more than 150,000 liturgies and thousands of hours of rehearsals and concerts over 150 years. Support the Erben restoration

A masterpiece of musical and visual art, its nearly 2,500 pipes still speak with grandeur and eloquence. Henry Erben’s factory in the 1840s was one of the largest in the city. He shipped instruments to cathedrals and churches in Havana, Guatemala, Venezuela, Colombia, and the new territories of the American West. Erben employed skilled European and American craftsmen, some of whom signed their names to the pipes they crafted.

Henry was also a politician and impresario: the opening exhibition of his 1846 Trinity Church organ had nearly 17,939 people in attendance. According to an account in George Templeton Strong’s diary, Henry had infamous quarrels with Trinity’s organist, Dr. Hodges, whom he threw from the organ loft! Previous to Dr. Hodges, Peter Erben (1771–1863), Henry’s father, held the distinguished post of Organist at Trinity until he was 70. Peter was a maker of pianos and organs too.

Installed just after the Civil War, the Basilica’s organ was brought by horse and carriage and was assembled by hand. It is a synopsis of all Erben learned over his six-decade career, and includes elements of the new “orchestral” style then coming into vogue. It is a testament to the skill of the craftsmen, and the foresight of the Cathedral trustees, to spare no expense: in 1868 dollars, the organ cost $15,000. The organ’s high quality is why it has remained in place, functioning, as times and tastes changed. In short: it doesn’t get any better than this. 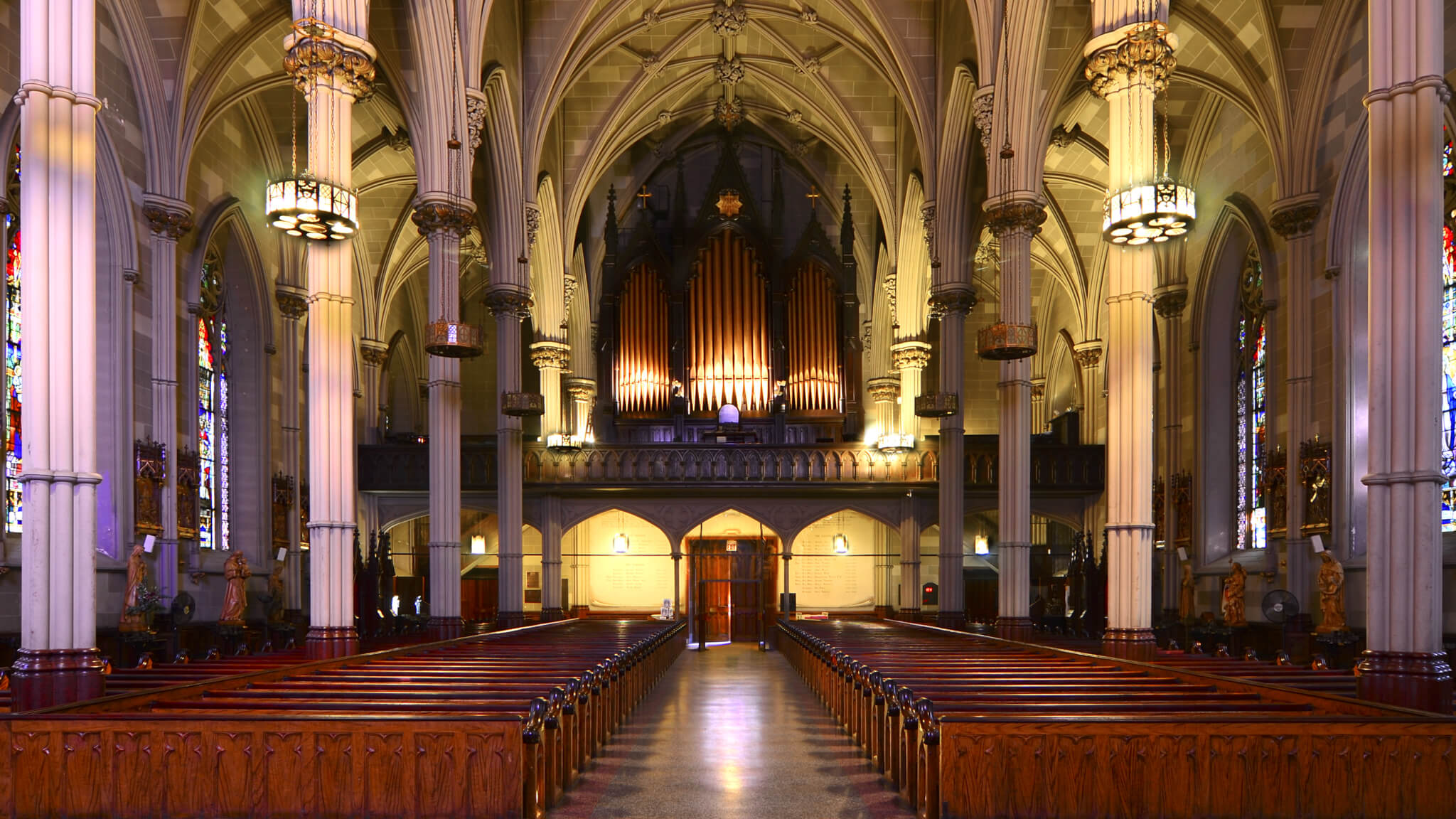 Though most other similar organs have either been destroyed or altered beyond recognition, this organ remains largely intact. It continues to accompany services and is used for recitals and practice.

However, after 150 years of New York City pollution and smoke, as well as dust from recent construction in the church, the organ needs a thorough cleaning. Due to past water leaks, fallen plaster has damaged some ranks—some pipes are unusable or barely speaking. The bellows leather is duct-taped as much as possible. There are hairline cracks in the windchests attributable to temperature and humidity stresses. 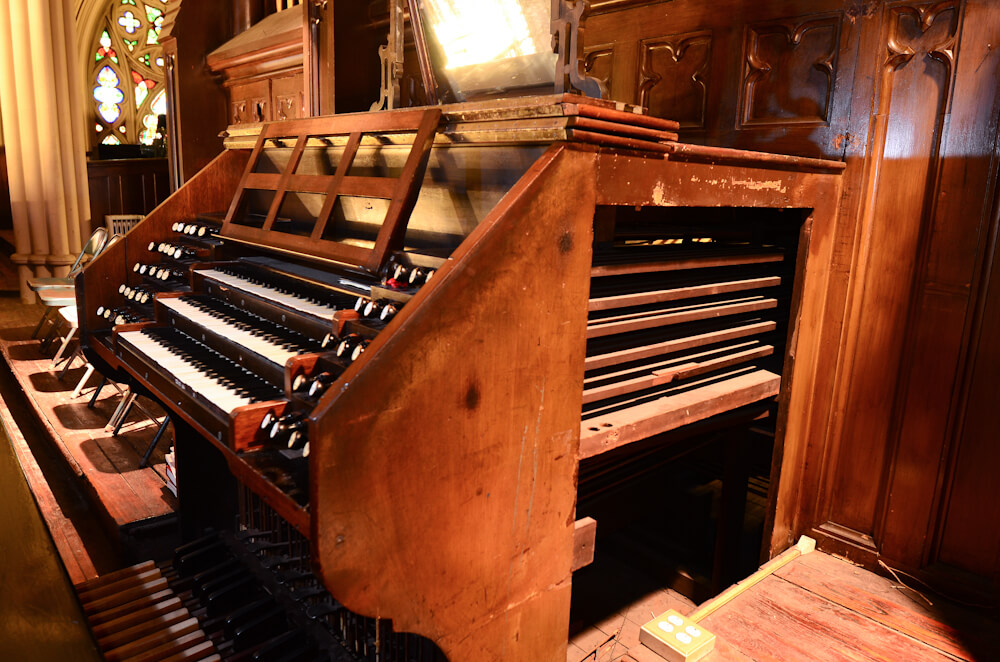 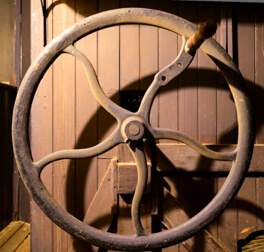 The restoration makes the original manual pumping mechanism functional again. The less turbulent air improves the sound, but it is a good opportunity to involve young people in performances and a teachable moment about forgotten “green” technology.

Another major component of the organ in need of restoration is the console. It contains:

Early in the instrument’s life, an organbuilder moved the console out from its original position in the façade. The new console position let the organist conduct the choir. It was a labor-intensive job, since everything is connected mechanically with walnut and other wood. The console the most compromised component of the instrument, and needs a well-thought out plan to make it reliable once again.

Fortunately, little work was ever done on the instrument. Most of the work that was done on the organ was not up to Erben standards: a few of the original ivory stop labels were replaced with cheap plastic; ciphers were fixed with duct tape; and the materials and construction of the replacement mixture were not consistent with Erben’s extraordinarily high level of craftsmanship. Neglect has been this organ’s friend – not much has been done to it, and it is an exceptional survivor from that age. This organ is the only example of an original, extant three-manual Erben, and is a jewel of organbuilding in New York City.

On October 24, 2004, The Organ Historical Society awarded its distinguished Historical Citation No. 326 in recognition of the Erben Organ as an outstanding example of organbuilding and worthy of preservation.

A recording made with the Erben Organ is available here: https://store.cdbaby.com/cd/gothamchant5

Donate to Friends of the Erben Organ. We thank you for your support

A recording made with the Erben Organ is available here: https://store.cdbaby.com/cd/gothamchant5