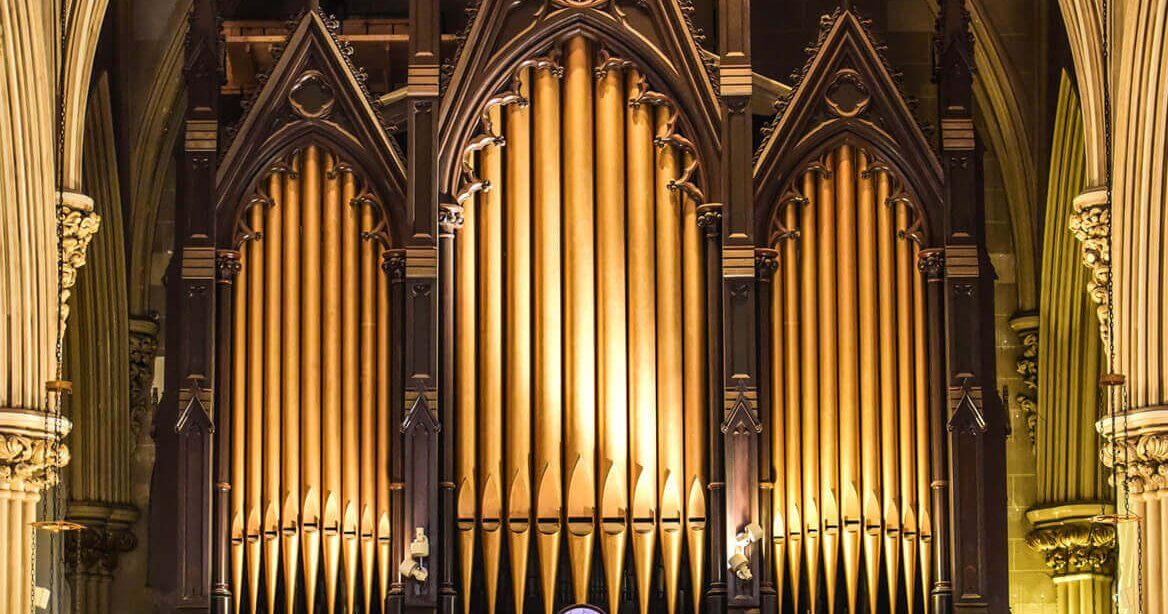 The Friends of the Erben Organ (“FREO”) is a 501(c)3 non-profit corporation dedicated to the restoration, preservation, and appreciation of the 1868 Henry Erben pipe organ and the 1859 Hall & Labagh pipe organ located in the Basilica of Saint Patrick’s Old Cathedral, located in the NoLIta section of SoHo in Manhattan.

The Erben organ is a living artistic and technological masterpiece. It represents the finest extant work of New York City organbuilder Henry Erben (1800-1884). Erben was the leading American pipe organ builder in the mid-19th century, and was never surpassed in quality and craftsmanship. More information about 1868 Henry Erben organ and its stop list.

The organization fosters the appreciation of this living instrument, built largely by and for immigrants, through educational programs and music camps, live musical performances, and organ demonstrations and concerts to visiting tour groups, arts and cultural organizations, schools, and universities.

The Erben organ is complemented by the 1859 Hall & Labagh chancel organ, installed in the Basilica in 2016. Henry Erben was Thomas Hall’s apprentice, business partner, and brother-in-law; Hall set up his own organbuilding enterprise in 1845. It is a rare, intact example of Thomas Hall’s work, and these two organs give us a marvelous sense of what and how people heard in that golden age of New York organ building.

Please visit our News and Events and like our Facebook page to stay up-to-date on the FREO’s activities.

Jared Lamenzo is an acclaimed musician, producer, and artist and the Director of Music and Organist of the Basilica of St. Patrick’s Old Cathedral. He has concertized on historic organs in Germany, Italy, Latin America, and South America, as well as the Vatican, and has worked with Grammy Award–winning artists. He serves as a member of the American Guild of Organists International Performer of the Year Committee and has served the Archdiocesan Music Commission’s Organ Committee. He is an Associate Organist of St. Francis of Assisi Church, and was the Organ Scholar at the First Presbyterian Church of New York. He is a graduate of Harvard in Applied Science and Engineering, with a Master’s degree from NYU’s Tisch School of the Arts. He served as President of the revived Harvard Radcliffe Organ Society and ran the Harvard Sunday Jazz Band.

Long fascinated with birdsong, he won a MacArthur Award for his work in environmental education, technology, and art. He has worked as a developer of innovative educational applications, often with music in mind; the latest with funding from the Mozilla Foundation. His music and multimedia works have been shown at the Chelsea Art Museum, Eyebeam, the Museum of Contemporary Art (Genova, Italy), the Los Angeles Center for Digital Art, Rockefeller Center, the University of British Columbia, Governor’s Island/Figment, the New Museum Ideas City festival, and many others. He has received support for performances from the Lower Manhattan Cultural Council and other donors, and has spoken widely on pipe organs, music, and STEM and STEAM education. His work as an organist has been featured in the New York Times, CBS News, and Sirius Satellite Radio. In his role as Director of Music, he continues to reach diverse audiences with innovative, educational performances of music old and new, as the Basilica builds on its role as a catalyst for the arts in the community and New York City.

President and Founding Principal, Revenue Works Inc., a New York based consulting firm. He is the Director of Development for the Basilica of St. Patrick’s Old Cathedral and revived the tradition of Christian burial on the historic grounds of the church.  Prior to starting his own consulting firm, Frank has held strategic sales and management positions for Fortune 50 and Global 200 Companies and was a member of the leadership team at WorldNow (now Frankly Co.), a ComScore Top 50 web property where he successfully led the turnaround of the Local Advertising Sales business. Frank is a former board member of the Cooley’s Anemia Foundation where he served as Director of the Speaker’s Bureau and New Chapter Formation.  He was a recipient of The President’s Volunteer Service Award from George W. Bush, for his work with charitable organizations. He is a graduate of St. John’s University in New York.

Reggie Gibbs currently serves in dual-roles as the President of Starr Wright Insurance Agency, the nation’s leading provider of Professional Liability Insurance for U.S. Federal Employees, and as Managing Underwriter for Security Risks, which includes all terrorism, political violence, workplace violence, and kidnap for ransom & extortion (KRE) perils.  Previously, Mr. Gibbs served as the Director of International Programs for Business Executives for National Security (BENS), a non-profit organization focusing on the development of public-private partnerships pertaining to areas of U.S. national security.  Before joining BENS, Mr. Gibbs was an infantry officer in the U.S. Marine Corps for six years. During this period he completed four overseas deployments to Southeast Asia and the Middle East with the First Battalion, Fourth Marine Regiment eventually serving in Iraq as the head of the Babil Province Iraqi police force in 2003. Following his time in the Marines, Mr. Gibbs served at the Pentagon in the Office of the Under Secretary of Defense for Policy (Eurasian Affairs) where he managed U.S. defense partnership programs throughout countries of the former Soviet Union. Mr. Gibbs, a former Term Member at The Council on Foreign Relations, holds an M.A. in Russian, Eurasian, and East European studies from Georgetown University, an M.A. in Diplomacy & International Commerce from the University of Kentucky, a B.A. in International Politics from The Citadel, and in 2005 was a visiting scholar on Middle Eastern security issues at Sandia National Laboratories in Amman, Jordan.  An art enthusiast, Mr. Gibbs volunteers as a guide at The Metropolitan Museum of Art, and The Rubin Museum of Himalayan Art, both in New York City.

Appointed Auxiliary Bishop of New York by His Holiness, Pope Francis in 2014, Bishop O’Hara was ordained to the episcopacy by His Eminence, Timothy Cardinal Dolan, Archbishop of New York. Appointed by Cardinal Dolan as Episcopal Vicar of both southern Manhattan and Staten Island, Bishop O’Hara is also serving the archdiocese as Vicar for Planning. He was also appointed by Cardinal Dolan as a member of the interfaith Committee of Religious Leaders. A chaplain to and member of both the Order of Malta and the Order of the Holy Sepulchre, Bishop O’Hara also serves as a board member of the Greater New York Councils, Boy Scouts of America.

Prior to entering Saint Joseph’s Seminary, Dunwoodie, Yonkers, New York in September, 1980, the future bishop worked in the communications field, serving first at Radio Station WERA in Plainfield, New Jersey, from 1967 to 1969, and later, from 1971 to 1980, at Radio Station WMTR/WDHA in Morristown, New Jersey, where he was named the station’s News Director in 1978. He is an avid champion of the pipe organ and its music.

Monsignor Sakano is the former Pastor of the Basilica. He was ordained a priest in the Archdiocese of New York in 1971, and while Administrator of the Church of the Sacred Hearts of Jesus and Mary, he spearheaded the Murray Hill SRO Law Project and the development of a 200-unit Section 8 apartment building for older and disabled people. He was assigned to Catholic Charities in 1979 and received a Master’s in Social Work from Columbia University in 1981. From 1985 to 1990, he chaired the New York State Catholic Conference Housing Committee. He is currently President and Chairman of Highbridge Community Development Corp. and its affiliates. He is President of the Board of Highbridge Voices, a youth music and education program serving the Highbridge community in the South Bronx. Before his assignment to St. Patrick’s, he was Pastor of the Church of the Holy Innocents for 14 years.

Curator Emeritus, Rare Musical Instruments, Metropolitan Museum of Art; editor-in-chief of the Grove Dictionary of Musical Instruments (Oxford University Press, 2014); honorary curator of Steinway & Sons, and past president of the Organ Historical Society. He was educated at the universities of Chicago and London (King’s College) and studied harpsichord with Paul Maynard and Thurston Dart. A prolific scholar and author in the field of organology and a leading advocate of historic preservation, he has taught in the graduate schools of Columbia University and New York University and lectures internationally, from Russia to Mexico City to Japan. In addition to about 200 publications, he has produced two nationally broadcast radio series and is responsible for over a dozen recordings from the Metropolitan Museum’s instrument collection. He is a Life Fellow of the Royal Society of Arts and recipient of the Anthony Baines Memorial Prize of the Galpin Society (UK), the Curt Sachs Award of the American Musical Instrument Society, a Likhachov Foundation fellowship (Russia) and numerous other awards and grants.

Reverend Canon Suzanne M. Culhane, M. Div. is an Episcopal Priest and the Canon for Stewardship for the Episcopal Diocese of Long Island. She also serves in parish ministry as priest-in-charge of St. Philip’s Church in Dyker Heights, Brooklyn. She brings over 20 years of fundraising experience in counseling religious and social service organizations. Working with three international firms and independently, over the course of her career she has assisted more than 100 organizations in raising nearly $100 million for mission and programs. Her expertise includes capital campaigns, major gifts, annual giving, leadership development, and planning processes. Recent client partners include Trinity Church (Boston), Saint Anthony’s Shrine (Boston), the Capuchin Franciscans, and The Church of the Ascension (New York). She frequently leads workshops and retreats in addition to clergy coaching around stewardship and fundraising. She has served as guest lecturer at The General Theological Seminary in New York.
Suzanne holds an M. Div. from Episcopal Divinity School and a B. S. from Siena College. She is a native New Yorker and a lifelong Episcopalian. She believes that God is in the numbers too and delights in building His Kingdom through transformational stewardship.

Wellington Z. Chen is the Executive Director of the Chinatown Partnership, a development group started after 9/11 to bring residents, community groups and business owners together to rebuild Chinatown, preserve the neighborhood’s unique culture and ensure its vitality.  Through many cultural, educational and business initiatives, the Chinatown Partnership promotes this historic area as a place to live, work, and visit.

Mr. Chen has a long history of community service and civic engagement. As a young volunteer and student of architecture and urban planning, he saw his neighborhood in decline and was inspired to revive it. He was the first Chinese American to serve on a community board and the first to serve as a Commissioner on the NYC Board of Standards and Appeals.

An architect by training, Mr. Chen worked for renowned architect I. M. Pei from 1980 to 1985.  He presently serves as a New York City Landmarks Preservation Commissioner and on numerous boards, including the City University of New York, the Coro New York Leadership Center, the NYC Regional Economic Development Council and the Metropolitan Museum of Art. He was born in Taiwan and grew up in Singapore, Hong Kong and Brazil.