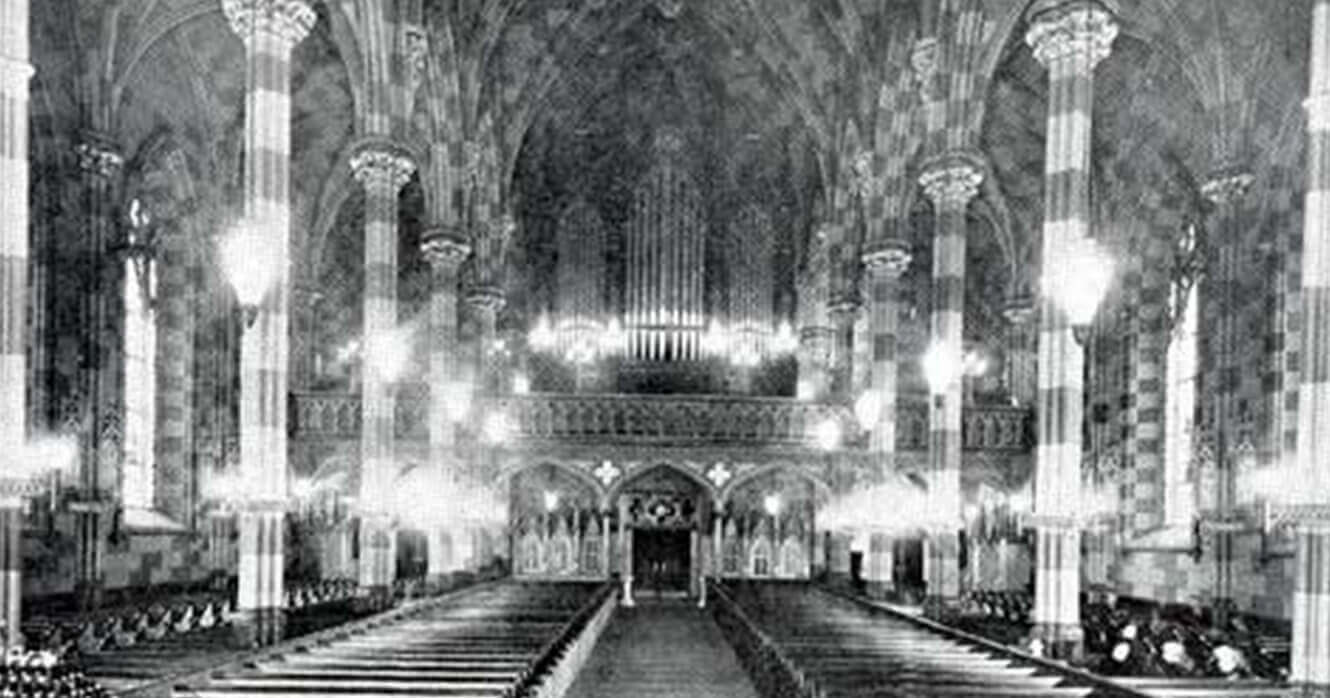 There are few places in New York City that can claim such a wonderful, deep history of music making. When the Cathedral was built, it was located amid woodlands and fields. In 1815, the city had the cultural sophistication of a small colonial outpost, lagging far behind other cities in America, and it struggled for an artistic position that matched its burgeoning commercial might. It wasn’t until 1842 that an orchestra was formed in New York City (the Philharmonic, after three other attempts); it was another generation when, in 1896, the first music professorship was created (Edward MacDowell at Columbia). In this milieu, the Cathedral was one of the few places to hear music of quality. Indeed, in an era when music was not accessible anytime, anywhere, as it is today, even culture-starved Protestants began to visit the Cathedral.

In 1826, the first in a long line of benefit concerts was given for the Orphan Asylum, and later, St. Patrick’s Old Cathedral School [1]. The Italian Opera Company, the first opera company to perform in New York, was led by Manuel Garcia. It also was the vehicle of stardom for his daughter, later known as Madame Malibran, with whom all subsequent prime donne were compared. The Garcias were brought to New York by Dominick Lynch, a Trustee of the Cathedral and sophisticated son of a banker who, recently returned from his Grand Tour, desired to finally “bring some culture” to New York.

When the Garcias arrived, Lorenzo da Ponte (1749–1838), Mozart’s librettist, was there to greet them; his brilliant collaborations with Mozart on Le nozze di Figaro, Don Giovanni, and Cosí fan tutte 40 years previous were presented to an entirely new audience!

Lorenzo, too, passionately tried to increase the level of musical sophistication in the city until his death in 1838. Da Ponte’s Requiem Mass took place at St. Patrick’s (Old) Cathedral, to the sounds of Allegri’s Miserere (this piece had been kept out of reach, a treasure of the Sistine Chapel, until the 14-year-old Mozart heard it and transcribed a “bootleg” from memory).

There is surely more musical history to be discovered relative to the order of worship, musical selections, and performance practice of these earlier times. We continue to search for historical materials for our archives; much has been lost. Unfortunately, the last century is an abyss; no names, programs, or hymnbooks outside of those from the last 20 years. Surprisingly, the 19th-century history is better documented; at that time, newspapers gave detailed accounts of Easter, Christmas, ordinations, and other celebrations.

Though there was much original music performed in the past, notably by Gustavus Schmidt (sic), there are sadly no extant copies in the church’s possession. Organ works edited by John White have been found, as well as sacred choral music by David Harrison and William Bristow. Bristow’s son, G. F. Bristow, made music with his father in the Cathedral, and later became concertmaster of the New York Philharmonic as well as a respected composer, conductor, and educator.

Pipe Organs in the Mid-19th Century 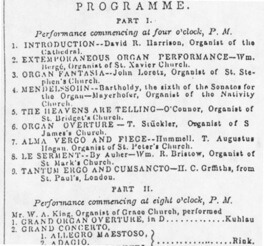 Organs of the mid-19th century were icons of the technological and cultural progress of the newly industrial American society. The Erben played a very important role in the rapidly expanding Catholic Church in New York and in the cultural life of the city. It is difficult to imagine a world in which music is not accessible in full fidelity, everywhere, as it is today. Before the invention of recorded sound and the foundation of philharmonic societies, the organ was the only mechanism able to interpret the new European orchestral music and American popular music of the time for large audiences. 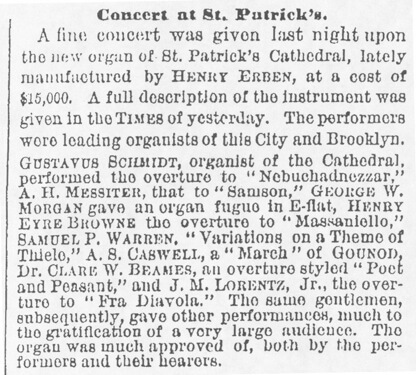 Looking across the Atlantic for musical leadership, America’s leading musicians were either natives of Europe or spent time studying there. This fact is evident from the beginning at the Cathedral, whose first music, and musical leadership, came from all over the world.

The program from the inaugural recital of the 1852 instrument shows a German and English influence in repertoire and performer, but there are also improvisations (one on a French opera by an American).  The 1869 program from the exhibition of the current organ features a great deal more opera transcriptions.

Organists and Pipe Organs of the Basilica

Though there was music at the opening of the Cathedral in 1815, it is difficult to surmise what it was or who performed it. Only second- or third-person sources exist to cobble together even this very incomplete list. Generally, there was a professional quartet at the Cathedral, augmented by the volunteer St. Patrick’s Choral Union.

1862: Henry’s son Charles enters the Civil War and is wounded at Antietam; returns to New York to work with his father.

Before coming to the Cathedral, the organist, conductor, and composer held the bench at the Church of the Immaculate Conception. [11] He is also listed as a clarinetist of the Philharmonic in 1853, and in many grand performances about the city. [12] His brother Henry was the hornist of the Philharmonic and a prolific professional musician. Unfortunately, Gustavus’ work as a composer is lost, as is the case with most of the music composed from that period. His music and the circumstances of its performance may be gleaned from accounts such as this.

1869: On May 10, the Transcontinental Railroad is completed, with the ceremonial driving of the “Last Spike” at Promontory Summit, Utah.

John White (1855–1902) was a London-born organist and recitalist. He was the organist, when in 1877, the Cathedral moved to its uptown location. He had a very successful career, later becoming the organist at the Church of the Ascension on 5th Avenue. By 1892, he had an address at the Dakota on Central Park West, [13] later home to Leonard Bernstein and the Beatles! White was a student of Josef Rheinberger (1839–1901) in Munich, and returned there in 1896.

No remarks as to a choir; no details.

Miss Nellie Cassin is listed as a director, with Gorman as Director/Organist. There was a boy’s choir from St. Patrick’s School in 1892–3. By 1895, Ms. Cassin’s title was Assistant, and there was a choir consisting of the following: Soprano – Miss Agnes R. Byrne; Alto – Miss Nellie McCarthy, Miss Nettie Sullivan, Mrs. M. R. Higgins; Tenor – Thomas Dowd; Bass – Fred Frank.

1909: Admiral Henry Erben, Jr., dies in New York with national coverage of his life; in 1943, the Navy destroyer the U.S.S. Erben is launched.

On Novemer 8, 1919, the famous concert organist Lynwood Farnam visited the instrument and reported its stoplist in his notes. He called it “very interesting. Pleasant, though small, diap. Very liquid pleasing flutes, even Claribel Flute 4′ on Ped.” [16]