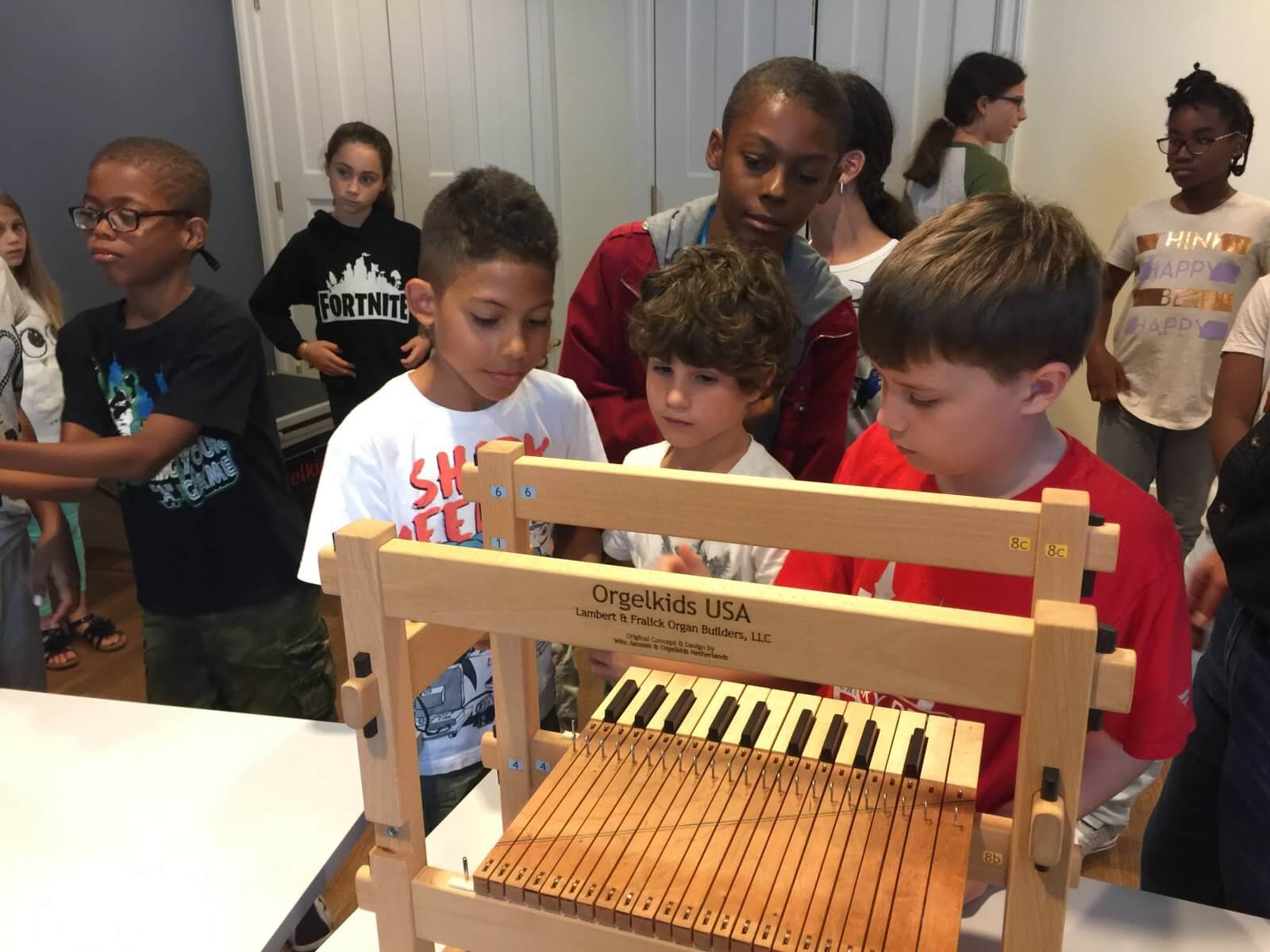 Congratulations to Our 2018 Pedals, Pipes and Peals Campers!

FREO is passionate about music education, both for young kids and for adults. Our second annual Pedals, Pipes and Peals camp was a “resounding” success. This year we had more applicants than the program could accommodate. We hope to be able to expand the program to offer it to more children and age groups in the future.

Children enjoyed learning about the big 1868 Henry Erben organ in the context of our own OrgelKids USA kit pipe organ, made by Lambert & Fralick Organ Builders for us.

Chimes and violin instruction rounded out the program. There were many opportunities to see and hear the Erben organ in action throughout the week, and also apply what they learn to the building of the OrgelKids organ.

Proud campers participated in Sunday Mass and showed off their newly acquired skills. Some of our campers already played different musical instruments, and shared their skills with the class. We talked about how a flute or clarinet has keys to change the resonant length so that pitch changes; in an organ, we have ranks of pipes.

On Wednesday, we had a special guest: Paweł Pietruszka, a clarinet player from Poland, stopped by to show children how a clarinet is put together and how it sounds. Kids were able to compare and contrast the orchestral clarinet to the Clarinet organ stop on the Erben.

Paweł and Jared then played a clarinet-organ duet and the children went behind the organ to see its inner workings in motion.

The high point of the program, undoubtedly, was the construction of the OrgelKids organ by children over several days, and having multiple opportunities to experience the big Erben. We discussed the physics of flue pipes and concepts of leverage encountered in simple machines as we built the organ.

Some kids showed a great interest and aptitude in improvising and registration (pulling stops).  To foster their talents and inclinations, we arranged for them to have extra time at the organ, and to assist Jared, our Music Director and Organist at the Basilica, at the console during Mass. This was a high-pressure situation and intense responsibility that the children handled beautifully.

But it wasn’t only all music all the time. Michael Bodnyk of Camp Rhythmo, our chimes instructor, led the kids in fun games to get them moving and having fun. Each day ended on a high note when the children would run around looking for an item Michael hid in one of the classrooms, or play “dead horse”, a hilarious game of “try to make me laugh”.

Our camp progress was charted daily on the FREO social channels: Facebook and Instagram, and got unprecedented response and reach. Our camp resonated with parents as well, who were excited to see their children grow in music during the week. One parent commented that they learned more music in a week than they had all year in school!

By the end of camp, the kids became friends, united together by their experience of building and experiencing musical instruments. Pipe organ construction and sounds are inherently fascinating to kids, and for many, it was their first time up close to a pipe organ. In this way, we are ensuring the continuity of interest and appreciation of the Erben organ and its music for years to come.