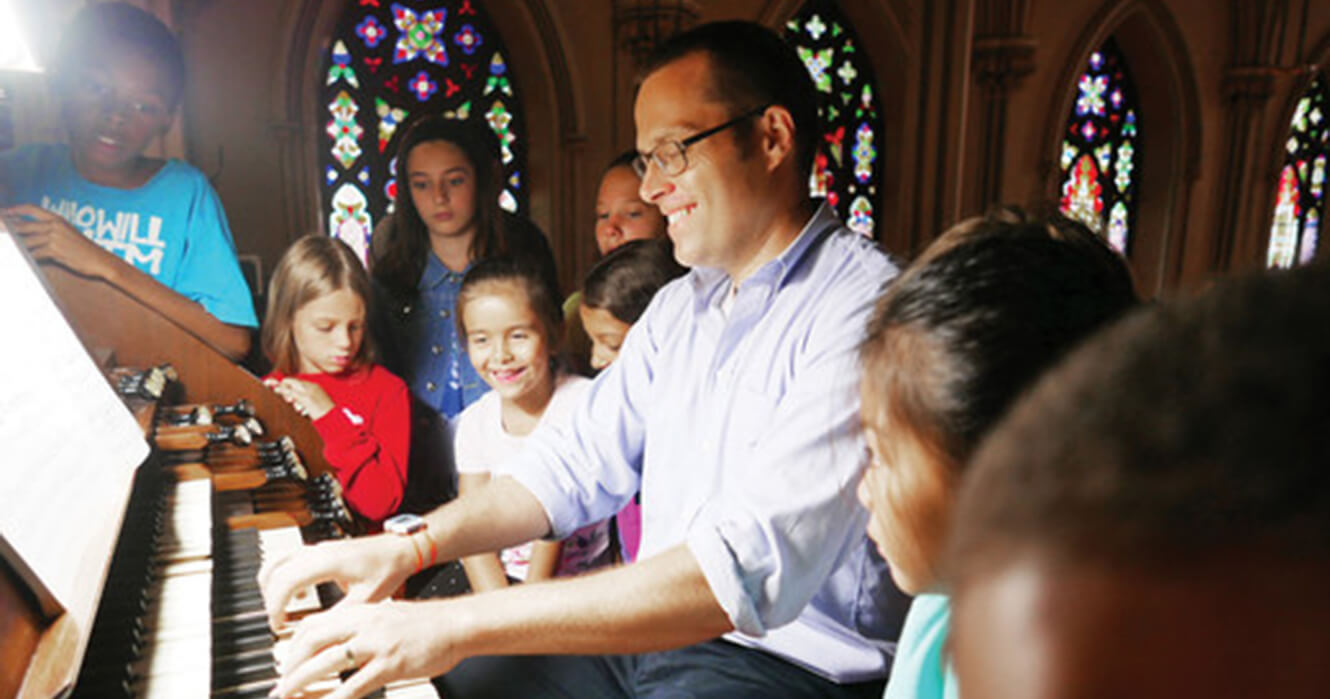 At the Basilica of St. Patrick’s Old Cathedral in Lower Manhattan, Polina Maller, 11, took a few moments from her violin lesson to talk about her appreciation for music. “It’s fun, and I like it. Music makes me feel like I’m free inside; it makes me feel like I could create things, and then I feel good about myself,” Polina, a classical music aficionado, told Catholic New York July 26, midway into a week of a summer music camp on the Old Cathedral grounds.

Eleven children took part in the first-time program, Pipes, Pedals & Peals, sponsored by the Friends of the Erben Organ. The Friends group is a charitable organization devoted to the conservation and restoration of the 1868 Henry Erben Organ, located inside Old Cathedral.

The five-day camp, which operated three hours each morning, was open to children ages 7 to 12. Organizers expect to make it an annual summer program.

The week’s activities for the music camp children included lessons in playing the violin and handbell chimes, and hands-on lessons about the history, uniqueness and intricacies of the Henry Erben Organ—yes, hands-on, they got to play the special pipe organ (Polina played a prelude of Bach). The wood Erben Organ has a three-manual keyboard, stands about 45 feet and has 2,500 pipes. “It’s about the size of a small apartment,” said Anne Riccitelli, president of the Friends group.

The children also assembled a special kit, creating a small, functioning organ similar to the Henry Erben Organ. The Orgel miniature organ kit was developed in the Netherlands; it is an educational organ that measures about 3 by 3 by 2 feet, weighs more than 40 pounds and has 48 pipes.

The children played the violin and handbell chimes at a Summer Camp Recital Sunday, July 30, during the 12:45 p.m. Solemn Mass at St. Patrick’s Old Cathedral. The liturgy, celebrated by the pastor, Msgr. Donald Sakano, was followed by an Erben Organ demonstration, and later a reception in the undercroft. The Old Cathedral’s organist is Jared Lamenzo, who gave the demonstration. The children casually played the small organ at the reception.

“They’re learning a lot in one week—the small organ will help them understand how the big organ works,” Lamenzo said while the children were learning how to play the handbell chimes July 26, a lesson given by Michael Bodnyk, a cantor at both Old Cathedral and St. Patrick’s Cathedral.

The violin lessons were taught by Addie Deppa, who noted, “Music in general, I feel, brings on a window of purity and beauty to children’s lives. I think it’s super important for children to have music…They (the music camp children) are wonderful; they’re very eager to learn, a lot of energy.”

Robert Hodge, 10, was also among the music camp children. “I love the class and the teachers are nice. It’s very educational,” Robert said.

Msgr. Sakano noted the Old Cathedral community’s love of the arts. “We have a program called Basilica Voices, where our young people who are preparing for First Holy Communion and confirmation are also being trained to sing…And then we have the camp, which is not a Catholic teaching program per se—but it is faithful in the sense that music is the sound that God likes hearing.”