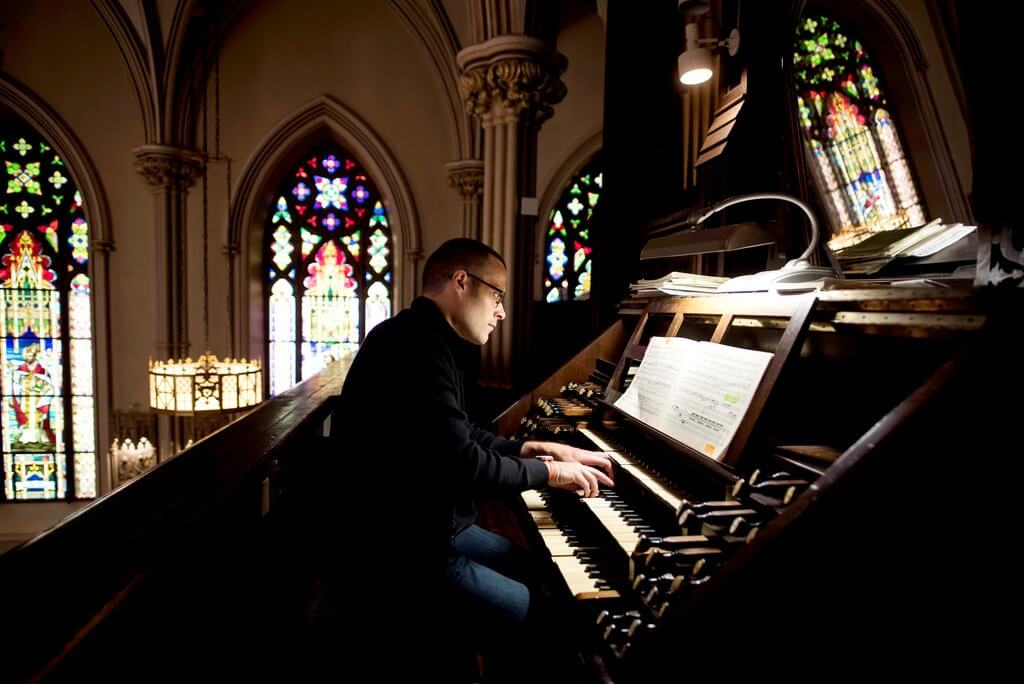 Basilica Organist and Music Director Jared Lamenzo and the historic 1868 Henry Erben organ have been featured in the May 2017 story “An Organ Master Who’s Part Musician, Part Mechanic” by Corey Kilgannon, with photos by Karsten Moran, in The New York Times. (Print version title: “Some Major Pipes to Clean”).

Something akin to an angel’s choir swirled out of the organ, reverberating from the choir loft, under the church’s vaulting arches, through the nave and past the glorious stained-glass windows.

The story details Jared Lamenzo’s background growing up in a 300-year old farmhouse in Connecticut studying piano and repairing classic cars with his father, and his eventual education path that took him to Harvard to study mechanical engineering, but also to access a distinguished pipe organ located there.

Mr. Lamenzo attended Harvard to study mechanical engineering, but also to have access to the venerable Flentrop pipe organ in Adolphus Busch Hall.

After arriving to New York, he was hired to play a wedding on the Basilica’s Henry Erben organ and immediately saw that it was something rare and special, albeit worse for wear after 150 years.

“I remember thinking, ‘There’s not a stop on this that doesn’t sound beautiful,’” he recalled before hitting the low C from the foot pedal, which brought a seismic rumble from one of the towering pipes lining the organ’s Gothic facade.

“It’s a strange thing to say about a 20-ton instrument, but we found each other,” he said.