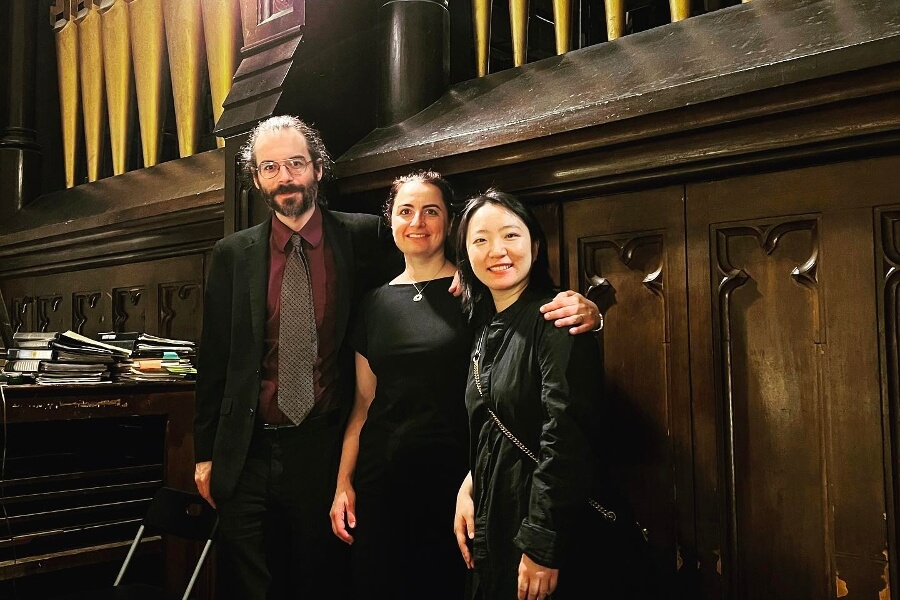 To celebrate international Make Music Day 2022, on June 21 we hosted a mini Erben organ festival, featuring five performances over the course of a beautiful afternoon. Thanks to all who came throughout the day, our volunteers, and our new friends!

Featured organists included Dr. Kalle Toivio, winner of the AGO National Improvisation Competition. He played an arrangement of the monumental tone poem Finlandia by Jean Sibelius, and a live improvisation on three submitted Ukrainian themes. The series also featured newly arranged organ & violin duets by Franck and others, played by Lavinia Pavlish and Jared Lamenzo. Other artists performing that day were Dr. John Wolfe, Yilun Wang, and Lana Krakovskiy. Enjoy some highlight photos and videos from the June 21 Erben organ festival!

Our chalkboard, shown on on Make Music Day 2022.

Best happy accident I ever stumbled upon!

In this video:
* Plein Jeu
* Fugue

About the music: Pierre du Mage was the organist at France’s Laon Cathedral beginning in 1710; the Suite du Premier Ton, dating from 1708, is his only surviving composition. This elegant music is exemplary of the French Baroque organ school in its mature form, making exquisite use of the tonal colors available on organs of that time and place. Intended for use during the Roman Catholic Mass, these pieces would have alternated with the singing of Gregorian chant, and in this case, fragments of the Advent Magnificat chant are woven throughout the musical texture. – Dr. Wolfe

About the artist: Dr. John A. Wolfe is a New York City-based organist, whose career performance highlights have included the Aspen Music Festival in Aspen, CO, the Sunday Afternoon Kilgen Organ Recital Series at St. Patrick’s Cathedral in NYC, solo recitals at Central Synagogue in NYC, and an appearance on the Naxos Records release Songs of Peace and Praise: Choral Music from Queens College. He presently serves as Organist and Music Director at St. Philip’s Episcopal Church in Brooklyn, NY. Wolfe holds the degrees of Doctor of Musical Arts from Rutgers University, where he studied with Renée Anne Louprette, Master of Arts from the Aaron Copland School of Music at Queens College, where he studied with Walter Klauss, and Bachelor of Arts from Vassar College, where he studied with Gail Archer. Wolfe is a native of Gettysburg, Pennsylvania.

Beautiful. I love working out music on older instruments. And I appreciate every single mechanical click and clack. Just beautiful!

About the music:
César Franck (1822-1890), Belgian-French Romantic composer and organist who was the Titulaire of Sainte-Clotilde church in Paris, was the chief figure in a movement to give French music an emotional engagement, technical solidity, and seriousness comparable to that of German composers. The Prelude, Fugue, and Variation, Op. 18 is the third of the Six Pieces he composed between 1859 and 1862, where he included some of his improvisations after church services. This piece was dedicated to Camille Saint-Saëns and emphasized utilizing the colors of the Cavaillé-Coll organs. The Prélude starts with a melancholy vocal-like melody in oboe, followed by a short, solemn interlude as a bridge to the fugue. After the stretti, the Variation comes immediately in attacca. The melody and harmony were derived from the Prelude, but this time accompanied by a rapid flurry in the left hand. – Yilun Wang

About the music: Théodore Dubois (1837-1924), was a French composer, organist, and teacher known for his technical treatises on harmony, counterpoint, and sight-reading. Théodore Dubois studied at the Paris Conservatoire, winning the Prix de Rome in 1861. As an accomplished performer, his successes came in various fields: ‘pure style’ masses, motets, oratorios, symphonies, and chamber music. Of the many organ pieces he left, nearly a hundred, the Toccata in G major, one of his famous pieces, is in the form of a bustling neo-classical allegro, with a central episode of slower notes in B major, and materials from the first section. Afterward, the main theme comes back and ends with the sonorous codetta. -Yilun Wang

Yilun Wang is a pianist and organist living in NYC. Prior to obtaining her Master’s Degree in Classical Organ from the Manhattan School of Music, she earned her Master’s Degree in Classical Piano from the Manhattan School of Music and her Bachelor’s Degree in Piano from the Central Conservatory of Music in Beijing. Yilun has been playing for more than 20 years, has founded a quintet ensemble and published albums in China, and has performed across China and Europe, including the National Centre for the Performing Arts, the Bach House in Köthen, the Royal Academy of Music Aarhus, etc. Her organ teachers have included Walter Hilse, Andrew Henderson, Raymond Nagem, and Katherine Meloan.

Above: a thrilling moment in Jean Sibelius’ Finlandia played by Dr. Kalle Toivio.

Jean Sibelius (1865–1957) composed Finlandia, the most famous of his tone poems, in 1899 as the last of seven pieces to be performed as accompaniment to a tableau of events from Finnish history. After he revised it in 1900, this highly nationalistic piece had to be performed under other titles in order to avoid censorship of Russia. The organ version is transcribed by Herbert Austin Fricker (1868–1943). He served as city organist for Leeds in his native England. In 1917 he emigrated to Canada. Fricker’s transcription of Finlandia was published in 1907 by Breitkopf & Härtel.

Kalle Toivio is a Finnish-American virtuoso concert organist and pianist living in New York City. He is the winner of the First Prize at the American Guild of Organists National Competition in Organ Improvisation. The CD-Album of Kalle Toivio Improvisations at St. Ignatius was released by the Pro Organo/Naxos-label in 2019. Kalle Toivio has played recitals in the United States, Europe and Japan, including at the Carnegie Hall. Kalle Toivio is the Organist and Director of Music at the Church of Notre Dame NYC, is in the organ faculty of Manhattan School of Music Precollege and is the Dean of the AGO Finland Chapter. Kalle Toivio received his degrees in Piano and Church Music from the Sibelius Academy in Finland. He received his Master’s and Doctoral degrees in Organ Performance from the Manhattan School of Music.

Dr. Kalle Toivio, First Prize winner of the American Guild of Organists National Competition in Organ Improvisation, improvises on supplied themes on June 21, 2022. This performance was the finale of the Make Music New York Erben Festival, which featured five free organ concerts held on the day.

The Ukrainian melodies sent in by our friends are:

* “Carol of the Bells” is a popular Christmas carol, with music by Ukrainian composer Mykola Leontovych in 1914 and lyrics by Peter J. Wilhousky. The song is based on the Ukrainian folk chant “Shchedryk”. Suggested by organist Maria Rayzvasser.

* A violin melody from the second part of a Violin Sonata by Viktor Kosenko, a composer suggested by organist Nadiya Velychko.

* Basso part from the finale from cantata by Mykola Lysenko “Rejoice, Dry Field” (a cantata about the harvest season and prosperity). This cantata was also suggested by Nadiya Velychko, an organist from Lviv, Ukraine, who played an Erben concert in 2021. The finale section has the lyrics “The steppes and the lakes will come alive, free and wide”. Lysenko composed the cantata based on the poem “Rejoice, Dry Field” by Taras Shevchenko, national poet of Ukraine.

In June, we marked the birth (6/27) and death (6/30) anniversaries of Venerable Pierre Toussaint, whose family is still buried in the Basilica’s cemetery (he himself was moved to the new Cathedral). Pierre, born into slavery in Haiti, became a great benefactor and helped build the Cathedral and the orphanage across the street run by the Sisters of Charity, in addition to his support of a great many other charities. Well-educated, he entertained guests with his violin, along with his niece, Euphémie, who studied pianoforte with Raymond (perhaps Richard) Meetz, a Frenchman who claimed to be a pupil of Mozart. Meetz was a musician, composer, publisher, and teacher; through him and his daughter Cesarine Meetz, Euphémie was likely exposed to the latest popular French music, such as that of François-Adrien Boieldieu (1775-1834). Boieldieu was known as the “French Mozart”, and his operas were immensely popular; Euphémie played one of his opera overtures, which we presented at our June 21 recital in arrangement for violin and organ.

See the full video at the link.