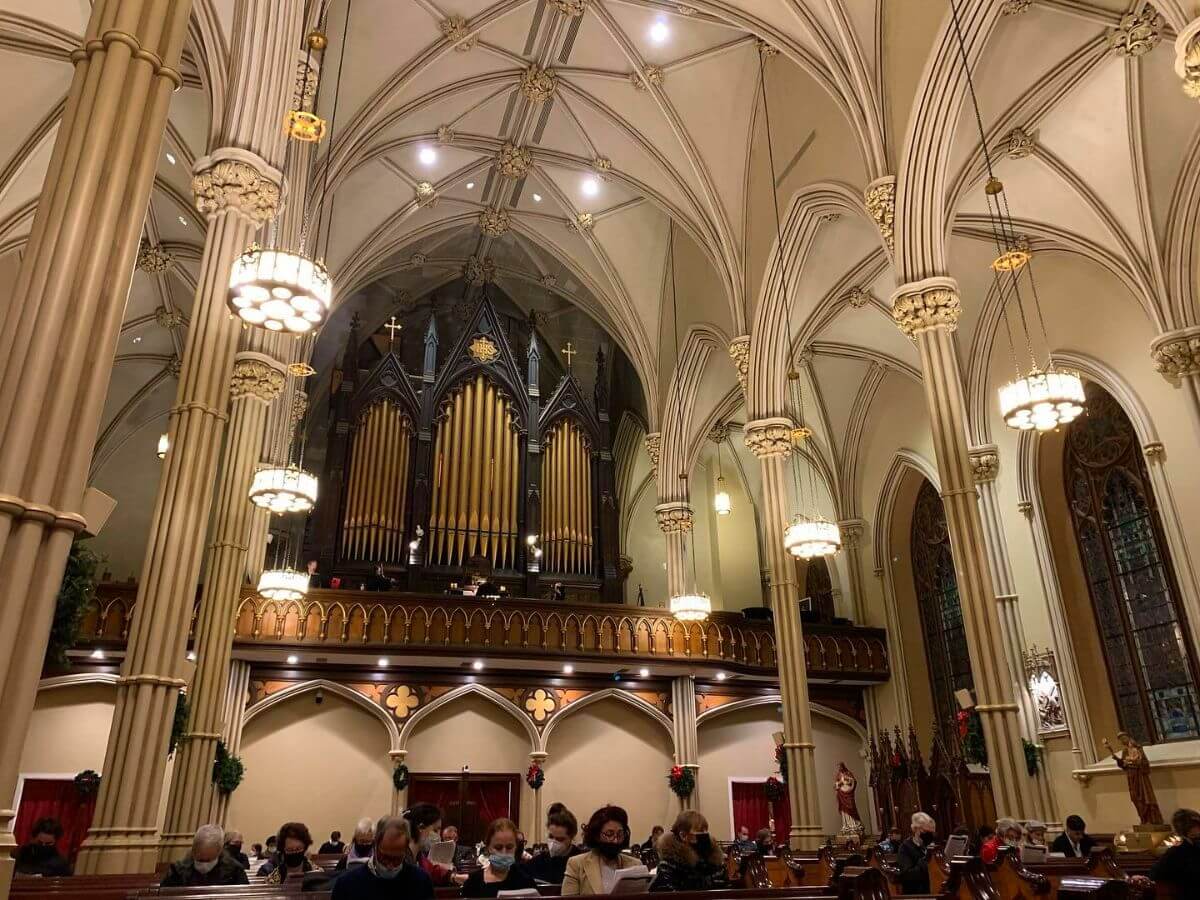 On two evenings, December 16 and 17, 2021, we presented our annual Victorian Carol Sings. These festive events with audience participation are a great way to cap off the year with some seasonal carols, written around the time that the 1868 Erben organ was built. In 2021, for the first time, we featured both our historic pipe organs, the 1868 Erben organ, and 1859 Hall & Labagh chancel organ. FREO Director and Basilica Organist & Music Director, Jared Lamenzo, hosted the events, which also featured a Maria Rayzvasser as guest organist, Lavinia Pavlish on the violin, saxophone player Randal Despommier, and vocal soloists Meg Dudley and Jackie Hayes.

This year, to accommodate more people safely, we changed the format of the Victorian Carol Sings from being a small gathering in the organ loft to hosting the audience in the spacious sanctuary. This way they could safely spread out and social-distance. By introducing solos and duets on the Hall & Labagh chancel organ, we enabled the audience to see the way an organist operates up-close, as well as enjoy a unique stereo effect of two organs sounding together. These historic 19th century sounds of the two organs resonating together can only be heard in one place in New York City, at the Basilica of St. Patrick’s Old Cathedral. The Victorian Carol Sings programs included classical music pieces such as Edvard Grieg’s Wiegenlied (Cradle Song), played on the organ with violin, and Charles Gounod’s Ave Maria, performed on the organ, violin and saxophone.

Victorian carol selections included favorite classic hymns written around the time the Erben was built, such as “O Little Town of Bethlehem” and “See, Amid the Winter Snow”.

Enjoy video highlights from the event:

The Ave Maria is based on the Gospel of Luke: the Angel Gabriel’s visit to Mary (the Annunciation), and Mary’s subsequent visit to Elizabeth, the mother of John the Baptist (the Visitation). Gounod improvised the soaring melody over Bach’s famous Prelude No. 1 from the Well-Tempered Clavier at the home of his future father-in-law, Joseph-Guillaume Zimmermann. Zimmerman, who taught at the Paris Conservatoire, wrote it down in an arrangement for violin and harmonium.

Perhaps the first performance of organ and saxophone in NYC occurred at nearby St. Francis Xavier in 1872 in an arrangement of Gounod’s “Ave Maria”. The organist was William Bergé; the saxophone soloist was the recently-arrived Dutchman William Lefébre, who played in the Patrick Gilmore band and who was regarded as the finest player of the instrument at the time. (via Robert Grimes, Fordham University).

Brahms, the great Romantic, set this carol in his set of chorale preludes that look to Bach as inspiration; these were the last pieces he wrote. The carol itself is a 15th-century German one, with a harmonization by Praetorius. Catherine Winkworth first translated the carol in 1869, the year the Erben was completed.

By request, we sang the Victorian Carol “See, Amid the Winter Snow”, by Edward Caswall (1814—1878)/John Goss (1800—1880). This hymn was published in 1858 as part of “The Masque of Mary and Other Poems” by the Catholic convert and hymnodist Edward Caswall. English composer and organist Sir John Goss set the text in 1871, writing the tune HUMILITY specifically for the carol. Bramley and Stainer (Goss’ student) included the carol in “Christmas Carols Old and New”; it was selected as one of the carols that had “proved their hold upon the popular mind.” Goss gave advice in the music that the carol would be best performed solo by a “Treble or Tenor or, alternatively”; so we had the soloist take the verses and all joined in on the refrain.

Zachau was a German musician and composer of keyboard and vocal music, especially cantatas. He was George Frideric Handel’s first music teacher, and Handel borrowed from Zachau’s music. This Christmas hymn (“From heaven above to earth I come”) was translated in 1855 by Catherine Winkworth, and has been source material for countless composers for almost 500 years.

The Wiegenlied, or Cradle Song, comes from Lyric Pieces, a collection of 60 short piano works by Edvard Grieg, composed from 1866 to 1901.

Following the Carol Sings, guests gathered in the narthex for some camaraderie, and per our tradition, Jared welcomed guests up into the organ loft to see the Erben up close.