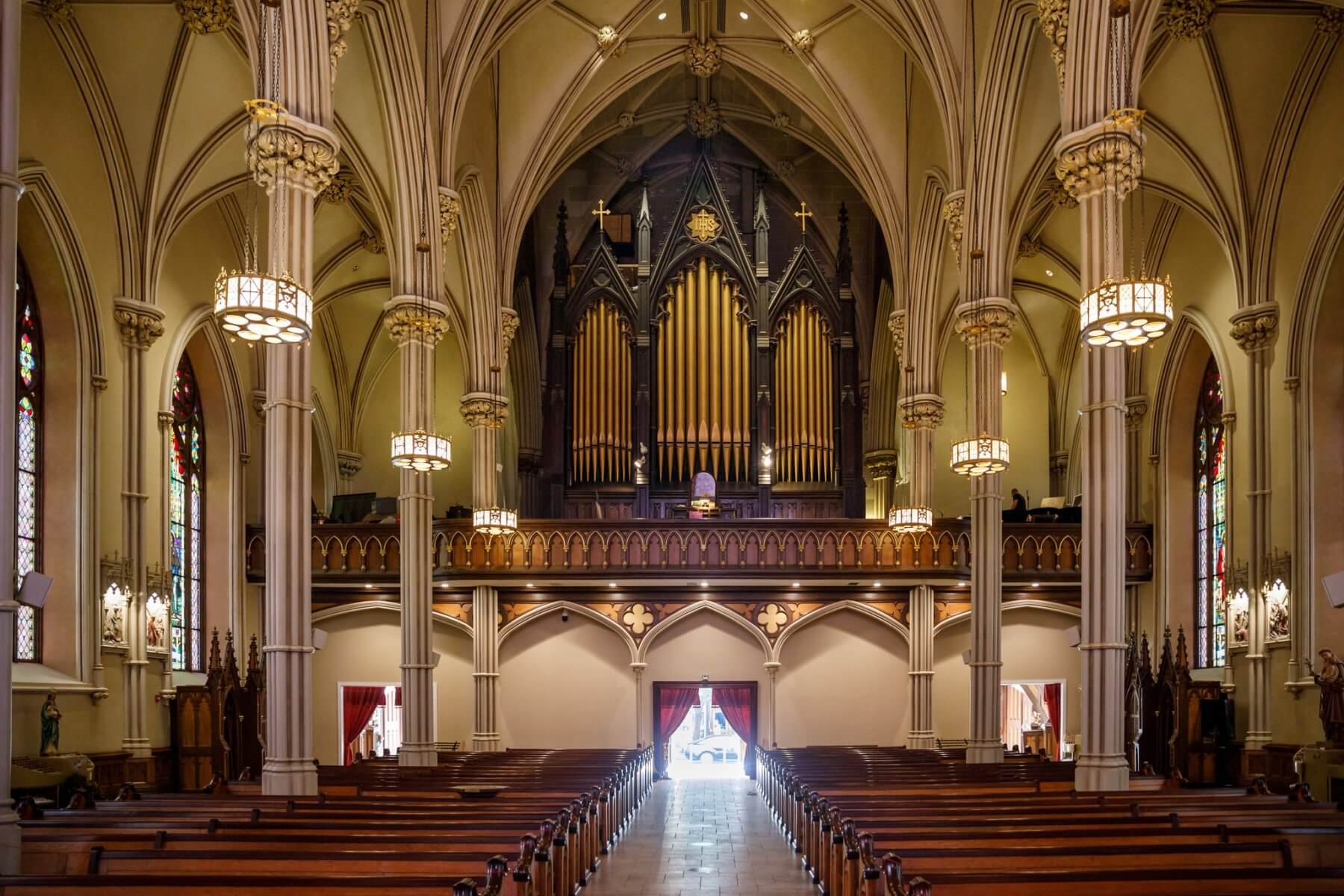 A mechanical wonder, the instrument requires no electricity between the organist’s fingertip or toe and each valve that admits air into one of its 2,500 pipes. And the music that issues from those pipes — the smallest the size of a pencil, the biggest 24 feet tall — ranges from a celestial whisper to an earthshaking, Old Testament thunderclap.

Inside: a history of the original St. Patrick’s Cathedral on the corner of Prince & Mott Streets in Little Italy and the remarkable 19th-century wall that protects it and those who came seeking a new life in America; a window into the life of the Venerable Pierre Toussaint, who was instrumental in promoting music at the Basilica; and a look at our historic 1868 Henry Erben pipe organ, resounding with solace and joy throughout the last 152 years.

We need your help. Please Read, Share, and Support the 1868 Erben. We have received letters of encouragement, as well as some donations, during this difficult time. Thank you for all your support and goodwill. We will continue bringing you Erben updates and sounds through live-streams and special features. If you’d like to help, we would be most grateful. Become a recurring donor to support our daily operations as we continue our mission at the time when our fundraiser recitals have been canceled or postponed due to the Coronavirus. Other giving options, such as Donor Advised Funds, gifts of securities and more, are also very much appreciated. More info can be found on:  https://erbenorgan.org/donate

“The instrument is a marvelously intricate device that Mr. Lamenzo, who studied mechanical engineering at Harvard, describes as a “pneumatic computer.” To watch his hands fly around its three manual keyboards while his feet dance across its pedals is to witness the operation of a retro-futuristic contraption that seems like something out of a Jules Verne novel.

A mechanical wonder, the instrument requires no electricity between the organist’s fingertip or toe and each valve that admits air into one of its 2,500 pipes. And the music that issues from those pipes — the smallest the size of a pencil, the biggest 24 feet tall — ranges from a celestial whisper to an earthshaking, Old Testament thunderclap.

The organ was commissioned after the 1866 fire, a munificent investment that Mr. Lamenzo described as an inspiring statement to the church’s Irish immigrants that “we’re not going anywhere.”

As the neighborhood has evolved since then, the instrument has played at tens of thousands of weddings and masses attended by waves of Irish, Italian, Hispanic and Chinese immigrants, among others.

But still the organ speaks with a voice resonant of the turbulent era in which it was created.

“We call it a sound of solace and of joy — there’s a triumphant sound — but there’s also a sound of melancholy to it,” Mr. Lamenzo said. “It was built after the Civil War, the archbishop Hughes had just died, and cholera is back in 1866.” All these strains of history can be heard in the organ’s breaths, he said, which produce “a visceral sound that can really get into you.””

John Freeman Gill writes the Streetscapes column for The New York Times, unearthing the hidden biographies of historic New York City buildings and their occupants. A native New Yorker and former reporter for the Times City section, he is the author of the critically acclaimed novel The Gargoyle Hunters (Knopf), a Barnes & Noble Discover Great New Writers selection. His work has been anthologized in two New York Times collections and has appeared in The New York Times Magazine, The Atlantic, The New York Times Book Review, The Washington Post Book World, New York magazine, The New York Observer, Salon, Literary Hub, and many other publications. A summa cum laude graduate of Yale University, where he won two prizes and was elected to Phi Beta Kappa, he received an MFA in writing from Sarah Lawrence College. He lives in Brooklyn with his wife, three children, and a smattering of gargoyles.