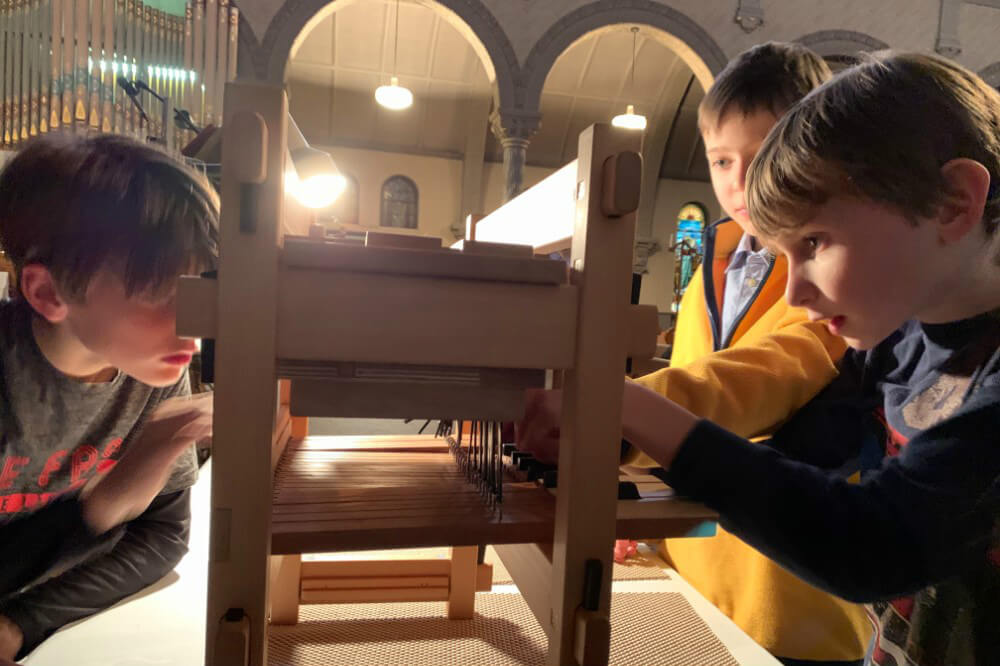 The Brooklyn Chapter of the American Guild of Organists once again invited FREO to bring the Orgelkids USA pipe organ kit to their annual Pedals, Pipes and Pizza event. This event, for kids in grades 3 through 6 who have some experience on the piano, introduces youth to playing the pipe organ.

The day at All Saints’ Episcopal Church in Park Slope, Brooklyn, started with Ellen Wright and Dr. John Wolfe demonstrating the various colors of the pipe organ on the church’s Delaware instrument, inside the case with the ornately painted facade pipes. The youngsters then were invited to come try the pipe organ. Children were excited to try using the different timbres and improvised or bravely played their piano pieces.

After the Pizza part of the program, the group moved on to an exciting build of the Orgelkids USA pipe organ kit, led by FREO director Jared Lamenzo. For the frame assembly, kids competed with their parents. Adults couldn’t keep up with the children who swiftly completed this task! Everyone was engaged and clamored to help sort and install the keys, trackers and pipes.

Local organ master John Klauder showed the kids the different kinds of organ pipes in his display case, and various types of organs, from Victorian parlor pump organs to Theatre organs. He told stories of his many years of work as an organ technician, having to crawl up precarious ladders into tight spaces.

There was plenty of time for everyone who wanted to try playing the pipe organ. Several kids were quite accomplished at the piano and tried their pieces with various timbres at the organ, while others were happy to improvise and explore the sonic possibilities. The chimes proved to be one of the popular stops on the organ!

We hope the students came away enriched and interested in the pipe organ, and look forward to next year.

Friends of the Erben Organ (“FREO”) is a 501(c)3 non-profit organization formed in 2017 with the mission of restoring, preserving and presenting the historic 1868 Henry Erben organ located in the Basilica of St. Patrick’s Old Cathedral, corner Prince and Mott Streets in Little Italy, NYC, and building a community of arts and music around it. Our summer program, Pedals, Pipes & Peals, introduces children to musical instruments through the lens of the monumental Henry Erben pipe organ.