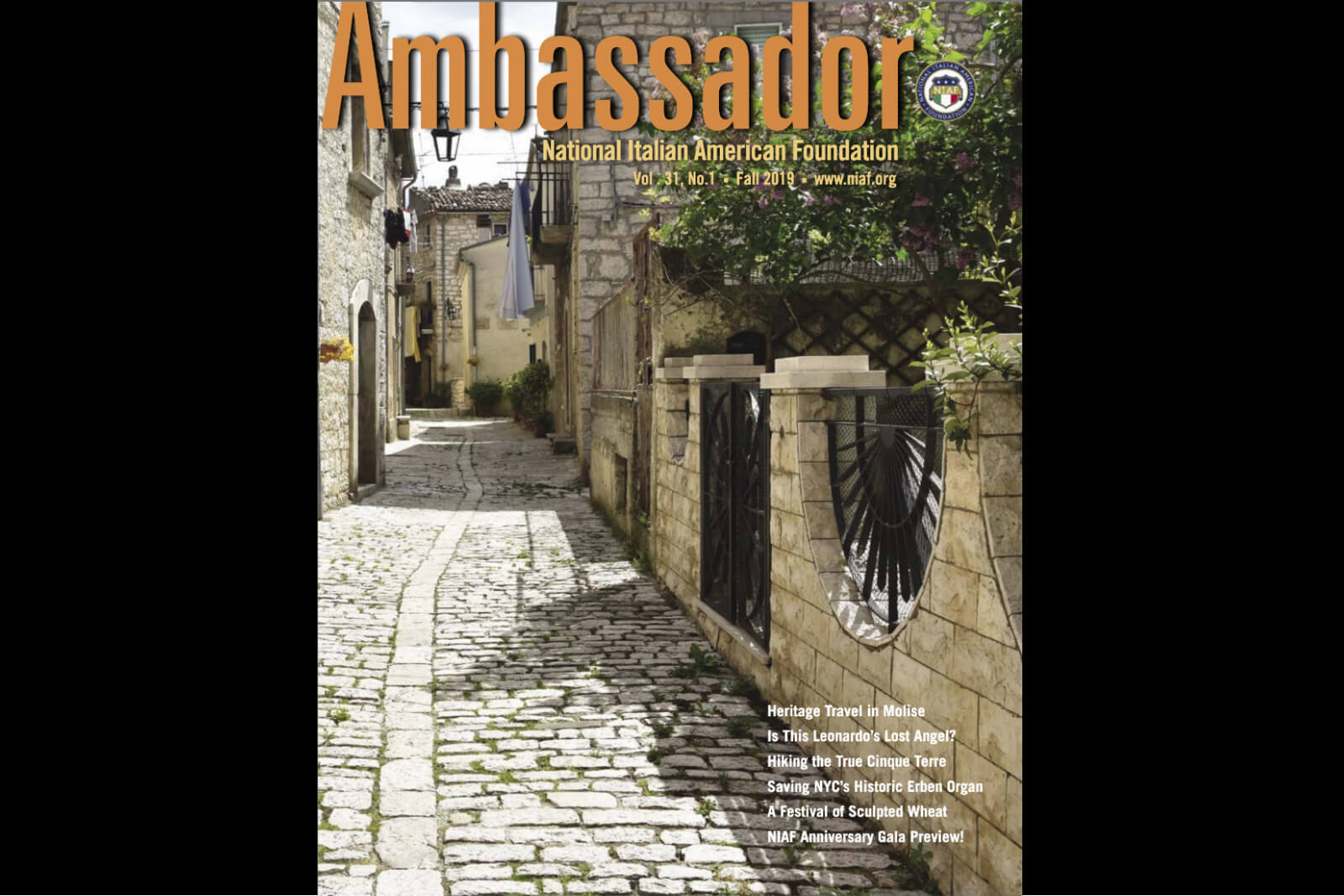 Basilica Organist and Music Director Jared Lamenzo and the historic 1868 Henry Erben organ have been featured in the story “No Pipe Dream” by author, writer, and film critic Maria Garcia, in the Fall 2019 (Vol. 31 #1) issue of Ambassador Magazine, the publication of the National Italian American Foundation. Just in time for National Italian American Heritage Month, read about Jared’s love of music history and engineering, and how it informed his quest to save the unique and irreplaceable Erben organ in the Basilica of St. Patrick’s Old Cathedral, on the corner of Prince and Mott Streets in Little Italy.

Screenshots from the online (PDF) version of the magazine story are below. To read the story on NIAF website, please go here. Maria Garcia is a New York City-based author, writer and Ambassador magazine’s Cinema columnist. Find Maria on Facebook and Twitter. 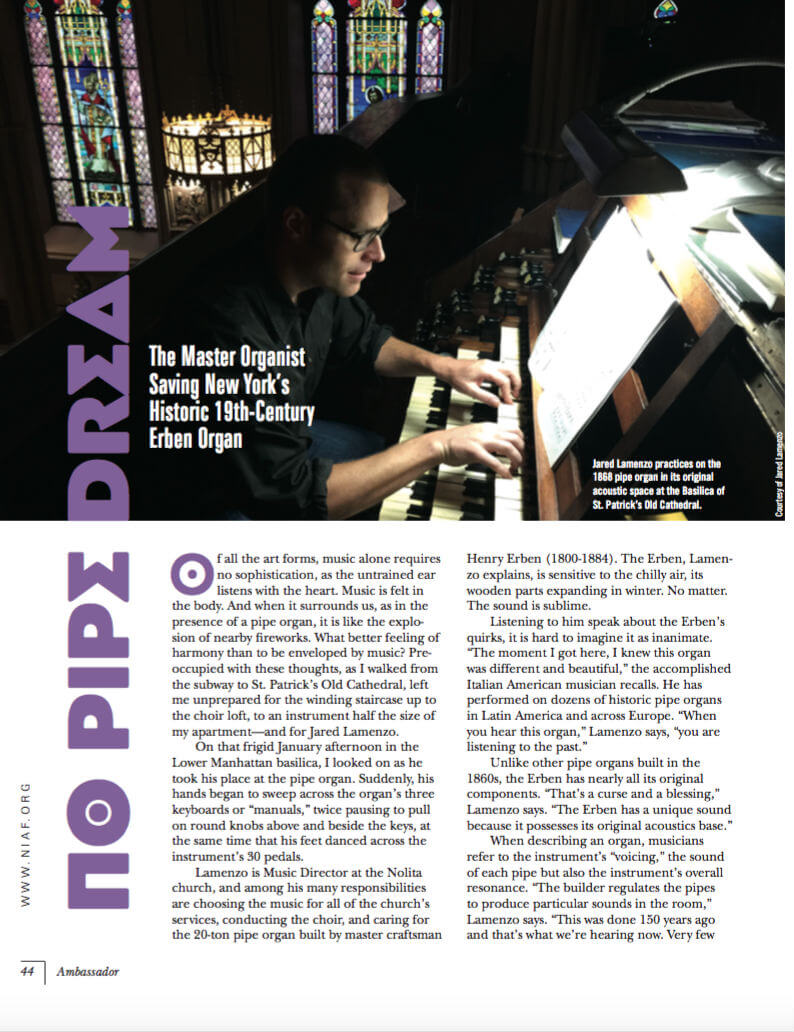 When describing an organ, musicians refer to the instrument’s “voicing,” the sound of each pipe but also the instrument’s overall resonance. “The builder regulates the pipes to produce particular sounds in the room,” Lamenzo says. “This was done 150 years ago and that’s what we’re hearing now. Very few instruments survive from that century, and this is the only intact Erben organ of its size.”

Page 2 of the spread shows the historic console of the Erben organ, and some of the distinguished performers and visitors who experienced the Erben this year. 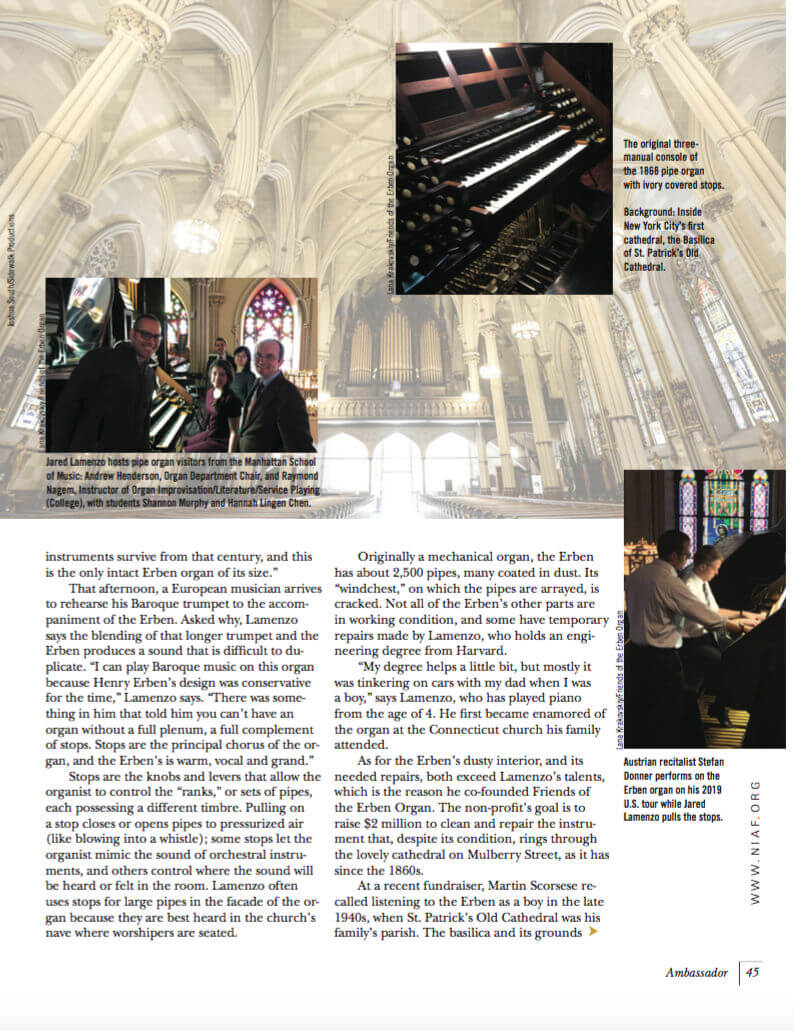 “There is a magnificence to this instrument, a triumphalism and sophistication, and then there is its unmistakable melancholy sound.”  – Jared Lamenzo 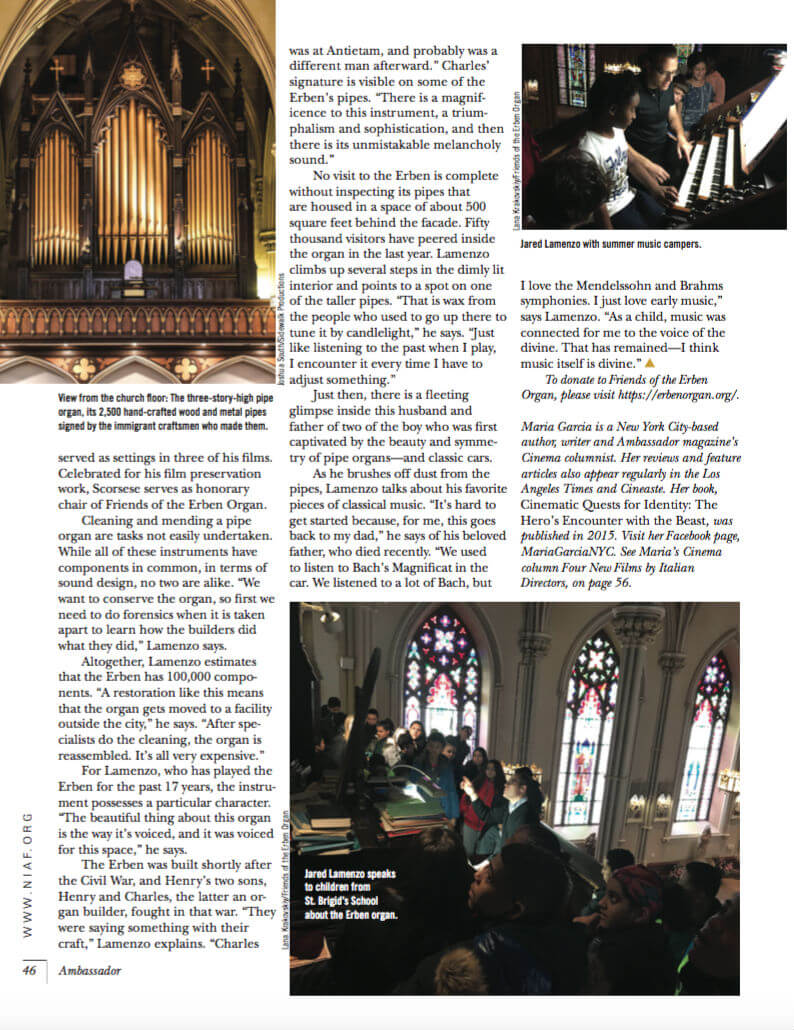 Page 3 shows the view of the gleaming Erben pipes from the front of the church. Other photos feature Jared at the Erben console showing the instrument to Pedals, Pipes & Peals summer music program participants, and students from St. Brigid’s School surrounding the Erben console listening to the deep pedal pipes of the Erben as Jared shows off the sonic capabilities of the 151-year-old instrument. Photos by Joshua South / Sidewalk Productions; Lana Krakovskiy / Friends of the Erben Organ, and Courtesy of Jared Lamenzo.

As for the Erben’s dusty interior, and its needed repairs, both exceed Lamenzo’s talents, which is the reason he co-founded Friends of the Erben Organ. The non-profit’s goal is to raise $2 million to clean and repair the instrument that, despite its condition, rings through the lovely cathedral on Mulberry Street, as it has since the 1860s.